Making Sky. A first story after a painting by Aris Kalaizis 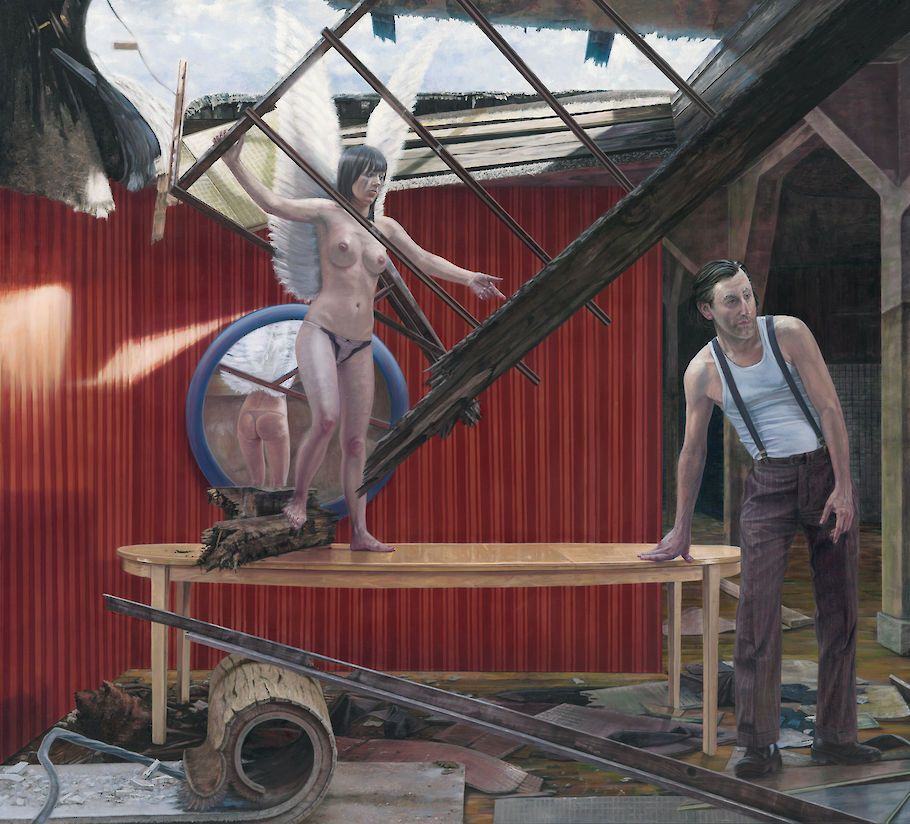 He hadn’t even started to set the table and now this.
“Did you do that?”
She just stood there on the table, like a meal.
“You’re asking me?”

The crack in the factory ceiling hadn’t been there a moment ago. Nor the factory. Nor the angel. Nor he. He looked around. It was highly unlikely that he’d find china, silverware and napkin rings in an abandoned factory. The hole in the ceiling grew larger. Or was it the sky? Don’t you want to live in something expanding, he thought.

“Actually you don’t,” she said. “But what can you do?”. “Cook,” he said forelornly. “Dinner. As a matter of fact, I’m a bit in a rush.” Finally the angel looked up. Instantly the sky – or the hole in the ceiling? – stopped expanding. “It is pretty, isn’t it?” His daughter would raise him from the dead for a dull question like that. Duh, dad, of course, it’s pretty. It’s the sky! “Why?” the angel asked. “Because,” he said, childishly. “Because?” “Because it’s the sky.” She nodded. Somehow that was a satisfactory answer. The wings she was wearing were slightly dirty, worn.

Maybe she was a sloppy angel. It must be a pain in the butt to maintain those feathery things. Birds do it. Bees don’t. The only time he had seen a girl wearing wings was backstage. He couldn’t say it had rocked his world. A few months later he was part of the team that knocked down the theater. On and off he took time off to work with his old construction company. 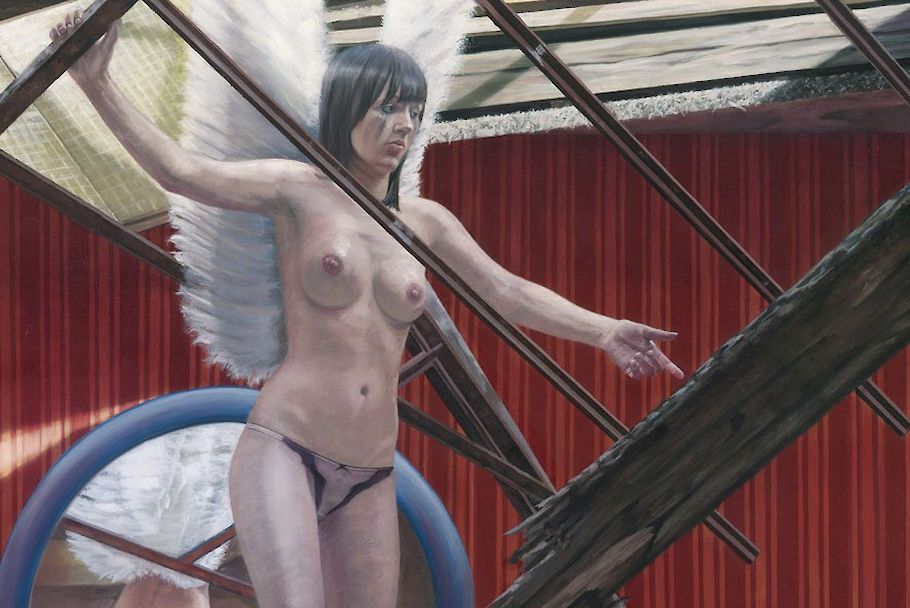 Somewhat embarrassed, it seemed to him, she flapped her wings. Do angels become self-conscious when you think of their wings, he wondered. Cool air, with a tinge of concrete dust, blew his way. The image of the angel wings trapped in the collapsing theater didn’t go away. “Bless you,” she said, just before he loudly released the tickling in his nose.

“Thanks.” He stared at his shoes collecting a layer of concrete dust and turning white. The factory didn’t feel abandoned anymore. Only recently had he shaved his head but the feeling of guilt didn’t go away. He was now cultivating a beard. “I’m sorry. I’m so inept at small talk,” the angel said. “Small talk,” he repeated. Now he was really pissed. He touched his skull. The urge to set the table didn’t go away. “All right then. Look, I don’t give a fuck about the hole in the ceiling. It’s not my ceiling. Maybe I made the hole. Maybe it was there from the beginning of time. Frankly, I don’t even know where I am.”

She smiled. “That makes two of us.” “That’s good. Good conversation. You are skilled at it.” “I adapt. They say you always do. Flap your wings and … you know.” “Thanks,” he said. The talk of sky and wings made him nervous now. He realized he wanted her to stay. “So anyway, what’s your name?” “Angelina.” She blushed. He couldn’t disguise his disappointment. But then you don’t choose your own name.

“A beautiful name,” he said. “But everybody calls me Lina.” “Of course,” he said. “Lina who falls through the skies.” Again he thought of the many buildings he had knocked down. He was pals with the guy who owned the construction company. The owner guy had ignored him when had worked for him fulltime, as just another working stiff, but once he had become successful the owner guy had offered his friendship – and the opportunity to knock down a building whenever he felt the urge. “Tell me whenever you feel like tearing down walls, cracking floors, ripping open ceilings. Tell me whenever you feel like making sky.”

“There’s more than one?” he asked. The question floated through the air before he realized that it was another duh-dad-question. “Yep,” Lina said and that was that. “And yours?” “My what?” “Name.” “Pentagrass,” he said and added, “for the time being.” He didn’t know where the name came from either. “You’re not sure?” “Frankly … can I confide in you?” “Isn’t that why I’m here?” All of a sudden Lina sounded angry. “You know, I’m up to here with people’s secrets!” She pointed to her chin, her hand casting a shadow over her left breast. “I feel like I’m full of shit, you know.” He laughed but instantly stopped. “But often we confide in the wrong person, and that brings misery upon us. So maybe we shouldn’t …” “I won’t bring misery upon you,” she interrupted him. “I promise. The instant I close my eyes all confessions are gone. That is, they’re still there, in me …” – she poked her finger into her belly button – “and sometimes it feels like I’m …” As she hesitated, Pentagrass helped her out. “Constipated,” he said.

Lina stared at him for a second, then burst out laughing. A laugh as clear and translucent as a cotton cloud. There’s nothing like bonding over a doodoo joke, even with an angel. Then he startled. “What is it, dear Pentagrass?” “It’s the first time I thought of you as an angel, Lina.” “You may touch them,” she said. “Everybody wants to. That’s why they look so worn. You did too when I visited you last time. You always do.” “I do? I always do?” Instead of an answer Lina flapped her wings. For a second, maybe less, she hovered over the still unset table. It was enough time for Pentagrass to touch. They felt feathery, just like feathers should. And Lina smiled. And the ceiling collapsed. All the sorrows in the world condensed in one spot. O the weight of his mind! His mind collapsed, not the sky. O glory, o despair. It felt so nightmarish because it was so familiar. It happened each time.

“There’s water in your eyes,” Lina said. “It’s nothing … nothing.” But Pentagrass couldn’t stop the tears. He felt like he was showing the angel what tears were. Lots of tears, a torrent of despair, an ocean of anguish, that came and went in waves. Fuck the watery metaphors, he thought. Being self-analytical helped him stop crying. “My darling,” Lina said. A gentle flap of her wings – a gentle breeze – and she wavered beside him, at the edge of the table, and pressed his face into her belly. Strangely, he could still see her pale behind in the mirror. Drenched in his own tears, he clung to her: she felt two-dimensional in his arms. “You don’t know what it’s all about, Pentagrass,” she said, adapting his tone of despair. “You don’t know why. You don’t know why you do what you do. Worse, you don’t even know how you do it.” “No,” he said, “I don’t.” She released herself from his grasp. His musculuar arms went limp. Her wings gained strength. Cool air came his way, this time pure, without the stale smell of a construction going down or up. “This feels good,” he said.

It seemed difficult to flap your wings and not fly away. Lina did her best, ascending only a few inches. “I’m glad, Pentagrass.” He couldn’t resist grabbing her again, wrapping his arms around her. Her butt was there, she was firmly three-dimensional – what was he thinking? – yet the butt in the mirror did not budge. Quickly he kissed her belly button but it didn’t change the world. It felt kissed before. The time it takes for an angel to cross a room he fell in and out of love. Lina looked through the hole in the ceiling as though longing to fly away. A school of clouds swam across the sky and started to close the ceiling. “Stay,” he said. Forever, he thought. “I can stay forever,” she said, enjoying the sparkle of hope in his eyes. “But who could live with so much bliss?” He could tell that Lina was flapping her wings as slowly as possible to give him extra time. Maybe he was one of her favorites. The sky disagreed, disappearing fast. “What is it you came to tell me?” He had the feeling he had asked her that before. Out of nowhere, a stack of dishes appeared on the table. Lina laughed. “I didn’t come to tell you anything. I thought you had to tell me something. Remember, you called me.” “I did?” “You’re really clueless, when it comes to it. So full of talent, so full of shit …” “You always leave me in shambles … depressed … do you know how many times I’ve almost killed myself?” She turned around, and for a moment they both gazed at the halfmoons of her behind in the mirror. At the same time, he saw the skin of her real butt thinning. Veins and muscles and nerves ate their way out, blood streamed gently down her legs. “Look at what happens to me!” she countered, as a pool of crimson collected around her feet. “But you’re the one who’s whining!” She paused. “At least you finally remember me. Like always: at the end. What is it I have to do? I crashed through the ceiling, I bared my soul for you – so will you remember me next time? That’s all I want, Pentagrass! Or is that asked too much?” Again, that mocking laugh. “Please come back,” he said, while she was hovering over the table, like any Madonna. Then she was gone.

Strangely, it seemed to Pentagrass that the ceiling was closed before she was gone. Finally things slowed down. He looked around. The reflection of her behind was still in the mirror. He expected it to disappear as well but it didn’t. Instead the strings of her thong became visible, organizing the space. So simple, he thought. Three lines and a triangle within the circle of the mirror. Why hadn’t he seen that before? For a while he just stood there. It was done. He knew it. The struggle was over, he thought, all too aware that the real struggle would begin now. Why did he always want more? Why did he always want another? Why is it never over? It hit him hard, like it always did. Drained him, exhausted him, pushed him to the edge. He knew if it weren’t for his daughter and his wife he’d jump. Just cook, pal, he told himself. Hike, relax. Collect mushrooms. Buy a lawn chair.

In silence, he cleaned the table. He tried not to wonder why there was a pool of blood. While laying out the silverware the factory disappeared. Next to his wife’s, and then next to his daughter’s, knife he placed a swan’s feather. Then he rushed to the kitchen to check on the lamb. In the morning, while collecting mushrooms for their celebratory meal, he had discovered the gigantic root of a tree, freed from the earth by lightning, maybe, and a little help from the heavy rains last month. Tomorrow he would go back and put it in their living room, ants and bugs moving in with them. The root would be the first element for his next piece. “I love your new painting,” his wife said, sitting down to eat, and added jokingly. “Almost as much as your cooking. I like the lamb with a touch of blood, not too dry, not too Greek.“ “Her heinie looks like mine,” his daughter said. As so often with her he couldn’t tell whether that was a good or a bad thing.

Christoph Keller, born in 1963, is the author of several novels, essays and plays, the novella A Familar Things (2003), the autobiographical novel The Best Dancer (2003), and the play The Foundation (2004). Keller divides his time with his wife, the poet Jan Heller Levi, between St. Gallen and New York City.