Manchester. A third story after a Kalaizis-painting

In Switzerland borned and in New York living author Christoph Keller (2009) writes with his third story to a painting of Leipzig painter Aris Kalaizis "Manchester". A surreally story between sky and hell 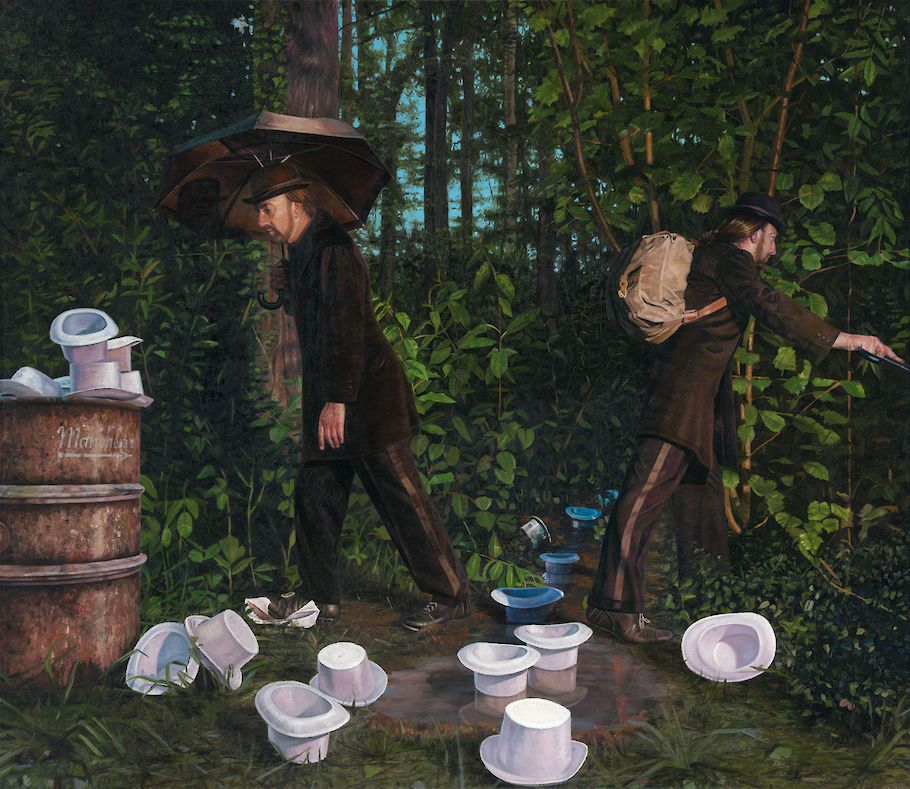 Their names were Robert and Paul. First it was Paul who put on the bowler hat. When Robert put on his, they were gone.

They were brothers. Robert, the older, was a restaurant owner, Paul was programming software. Lately, there had been an alarming amount of fights between them, some violent.

“Why did you punch me?” Paul asked. So suddenly surrounded by dark trees, he longed for Elisa’s slender body. He also felt hungry.

As Robert couldn’t turn around, he glanced at his brother over his shoulder. Paul was wearing an old-fashioned brown suit and a heavy-looking backpack. They were in a small clearing that looked familiar.

Paul sensed that Robert’s silence was the silence of the wood, filled with the noises of creatures he couldn’t see: there was chirping and clittering, hissing and belling. He must have had a reason for punching me, he thought. Robert never did anything without a reason. Even when blowing off steam, he did it in a carefully premeditated fashion. Robert was holding an open umbrella. It wasn’t raining, was it? The air felt dry, smelling invitingly of warm resin, aging foliage. All trees had leaves, none needles.

Robert felt something under his foot. Something soft that got harder when, summoning all his strength, he pressed his foot down. It was a white top hat. He must have crushed it arriving here. It felt wrong. Just like it felt when, as a young cook, he had spit in a soup and then had the waiter serve it. He didn’t even know who had ordered the soup. It was a horrible moment. He often thought of it. If he had always hated that guest it would have been different. If he simply couldn’t stand his face, it would have been easier to understand. But he didn’t even know who would get the soup. His guests were his family. Was it possible that he had hit his brother, just like that, and because there wasn’t a reason he had done it, he had completely forgotten about it? But he hadn’t forgotten about the soup. And he loved his brother, didn’t he? 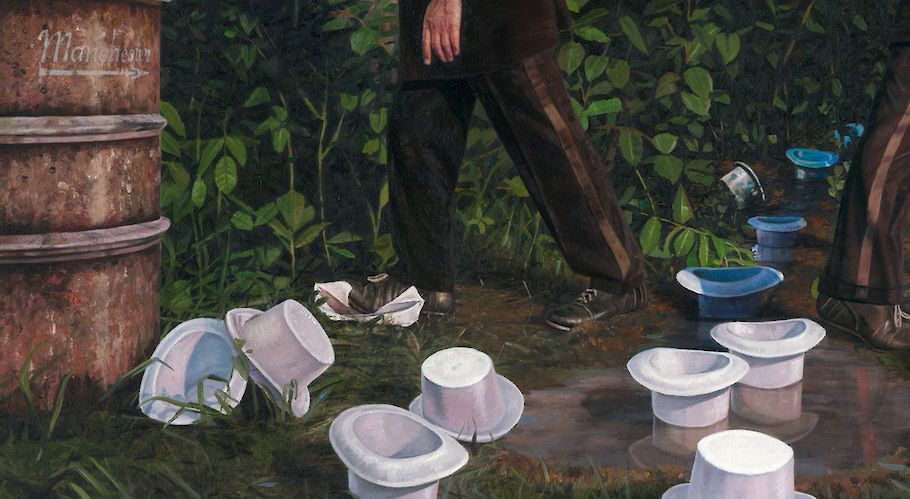 Robert tried to lift his foot but couldn’t. Glancing at his umbrella, he said, “It’s been raining white top hats, Paul.”

Paul was feeling the weight of his backpack. He kept poking with the handle of his umbrella. Or was it a cane? Just because his brother was holding an umbrella didn’t mean he was holding one as well. He didn’t know the rules of the place yet. He was searching something. He looked at his hand holding the slick veneered handle, but when he looked beyond it, there was nothing. No shrub, no trees, no ground, not even darkness. The world just stopped. But when he glanced sideways, he could see for miles, deep and deeper into the wood, just by following the white top hats with his eyes.

“It’s not wet, the sky is cloudless, and I’m holding an umbrella. What else could it be? Everything happens for a reason. Accept that in your heart, Paul.” It angered Robert so much to think of God.

“The hats have been here before us. Before we came,” Paul said. He thought of his daughters, five and eleven, from two different mothers. Both refused to see him. He thought of Elisa’s daughter Myrna he spoiled so much. He was afraid of losing them, of losing all women in his life. He remembered Myrna’s blue sweatshirt when he had taken her to the playground recently—how the cotton had ripped when her sleeve got caught in a branch—but he didn’t remember a single one of his own daughter’s dresses.

“We didn’t come, brother,” Robert said. “We’re … just here now. Like guests who have already taken their seats but, miraculously, what they ordered is already on the table, hot and steaming.”

“Like a vision?” Paul laughed, but it was an insecure laugh. He couldn’t get that ripped piece of clothing out of his mind. There was the staccato of a woodpecker hitting a tree. It had the quality of speech. “But to whom? There’s no one. Is it a vision when there’s no visionary?”

“How do you know no one’s watching us?”

“What is our message in that case?”

“Maybe we are the message, but we’re not supposed to know what the message means. Fact is we’re here.”

“You don’t know that. What if we do belong here? What if we have been in the wrong place all along, and now, all of a sudden, this place opened up?”

Robert sadly shook his head. Fact was that they both didn’t understand what was happening to them. Fact was that whenever Robert felt something, a presence, something not to be named, Paul felt compelled to ridicule that moment, taking it away from him. That was a reason for punching him.

“What would you make of that?” he said. “A place … suddenly opening up for us?”

“I would make of that …” Paul stopped, surprised, then said, “Maybe it makes us gods. Gods with no worshippers, left to our own devices.” He hesitated. “Or are the top hats the worshippers? Do they worship us? Or are they the gods and we’re supposed to worship them?”

Robert felt the strong urge for a clear-cut faith. His restaurants, worker’s waterholes turned food temples, offered pricey organic gourmet meals, and whoever questioned that was free to eat elsewhere.

That was when Paul became aware of the shiny, polished surface on the ground behind him. A tiny skating rink with two white top hats obliviously skating. That much Paul could see from the corner of his eyes. He sensed that there was something underneath it. Something so terrible it made you lose your mind when you knew it, something so crucial it ate you alive when you didn’t.

“I punched you,” Robert said, “because you betrayed me with my wife.”

More than ever Paul wished he could move—and put his hand on Robert’s arm. He now remembered clearly why Robert had punched him. He had stood up for Johan, one of Robert’s waiters, whom Robert had fired so heartlessly. Robert must have experienced that as betrayal.

Paul nodded. “It has all started at Manchester.”

“Your restaurant, of course. Don’t you see … what’s written on the barrel, the arrow underneath it! Let’s go there, fix everything, Robert, before it’s too late. Johan … he needs his job.”

Robert cinched, filled the wood with angry silence. There was the feathery rustling of the leaves, the demanding howling of the wind.

“Why not?” Paul insisted. “Why are you so hard on him? Yes, he screwed you by not showing up, but wasn’t he genuinely sorry when he did, ready to make up for it? He panicked. His girlfriend is pregnant. Give him another chance. Show some heart, brother.”

“Why can we speak here, Paul,” Robert said after a while, “while we can’t move anymore?”

“Maybe so we can articulate our fears?”

“The top hats,” Robert said. “I remember now. It has nothing to do with Johan. We were having lunch, at Manchester. Then Pentagrass showed up. The painter who occasionally eats here. With two bowler hats and the suits his wife had tailored—the ones we’re wearing now. Remember?”

Then, suddenly, the world opened up. Paul, terrified, looked around. There was still nothing where he was standing, poking with the handle of an umbrella or a cane. But suddenly, he was afraid that if he wouldn’t stop he would find something—a piece of torn clothing he would instantly recognize as belonging to Clara or Selma’s dress. He dropped the handle and swirled around, announcing agitatedly, “I have to hurry—take better care of my daughters. Let’s go, brother, while we can!”

But Robert shook his head. “I do belong here, Paul. I’ve never felt that way before. I’m sorry I have punched you—did I really? And did I really fire Johan? Tell him he can go back. Tell him to take care of the restaurants and report to you until I’m back. If that’s okay with you, of course.”

Christoph Keller, born in 1963 in St. Gallen, is the author of several novels, essays and plays, most recently the novella “A Few Familiar Things” (2003), the autobiographical novel “The Best Dancer,” (2003), the play “The Foundation,” (2004) and the photography show “Eye Catcher” (New York, 2006). In the spring of 2008, The State of Last Things was published, the third novel with Heinrich Kuhn as Keller+Kuhn. He divides his time with his wife, the poet Jan Heller Levi, between St. Gallen and New York City. This is his third story after a painting by Aris Kalaizis.