On the Uncanny Reccurence of the Foreign

The Austrian curator Dr. Peter Assmann describes in his essay the appearence of the real in Leipzig-artist, Aris Kalaizis paintings. Therefore is » viewers own 'dark room' « (Alfred Kubin) an essential aspect of every viewer in every art 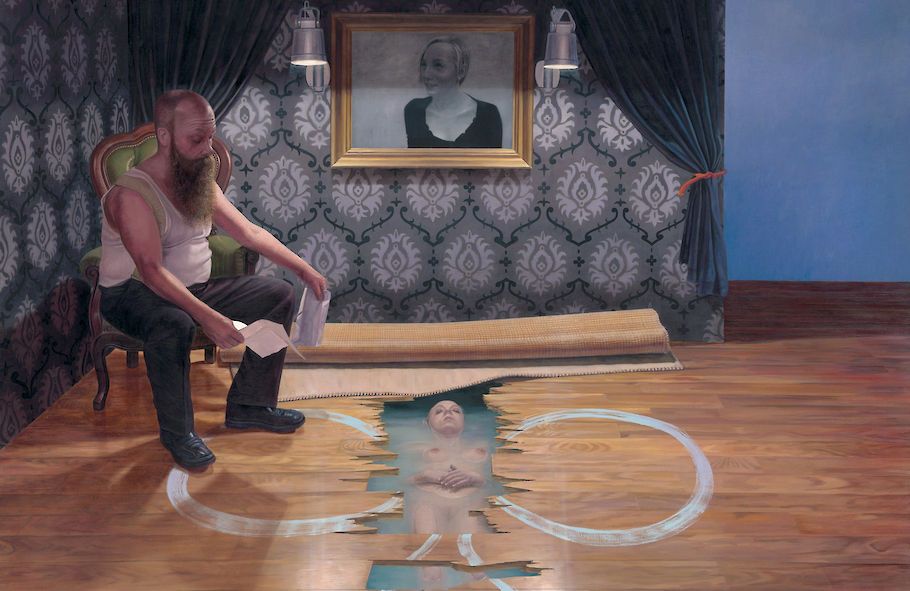 ... it is always important to wait, to experience a form of arrival, and then to wait again. Many words and many discussions fill the interim period. Few visual artists fill this space of waiting and lingering with so many words as in this case. Stories that always somehow seem probable, shards of memory, sometimes his own, sometimes pictorial, and sometimes those told to him by others, but then there are also shifting states of mind and of feeling that demand description and exchange.
And yet these pictorial constellations seem to effortlessly elude the constraints inherent in reality. Every imperious approach is met with so much openness so that its domineering rumble echoes into a wide emptiness after a few sentences and does not arrive at the comprehensive reality of the »otherness«. It seems as though the space surrounding the beholder is darkened down. After the curtain has opened again, the projection light is turned on, and a new pictorial reality is offered up to us. Yes, indeed.
Aris Kalaizis certainly operates as a film director. He sovereignly ›directs‹ the pictorial world. He directs and leads it on, leading himself and the beholder through abundant opportunities of orientation. He repeats motifs without giving certainty. He refers back to things already known or familiar without making an entire recognition possible. And he (possibly) uses everything and anybody as props within his »rendition of an alternative world«. Because: »in accordance with my understanding of truth, I’m interested in experience.«2
The possibility of following a picture is always given, never mind how often one’s own visions and imaginations may swim or rush to the surface. The »individual picture-laden dark room« (Alfred Kubin) of every beholder is an essential element in the work of Aris Kalaizis: those individual readings decide how intense its artistic force may be and how plausible it appears, if it isn’t already directly painted into the picture itself, as in (every) »Reccurrence of a Farewell«.

But it is the questions of relationship that incessantly push us forward. Those questions that are forever irritating and that rattle the »figure’s vigorous self-referentiality«3, but still cannot be removed from us bit by bit. What remains is the greatest possible openness with respect to attributive and relational decisions that try to make ties and relations more concrete. But this openness keeps them preliminary by way of the intensity in its ambiguous message. And everything gains some sort of objectivity in those relationship cosmoramas and tends towards reticence, which certainly can be bridged by words – »because I want to reach out to the spiritual and intellectual wealth from my beholders«4. 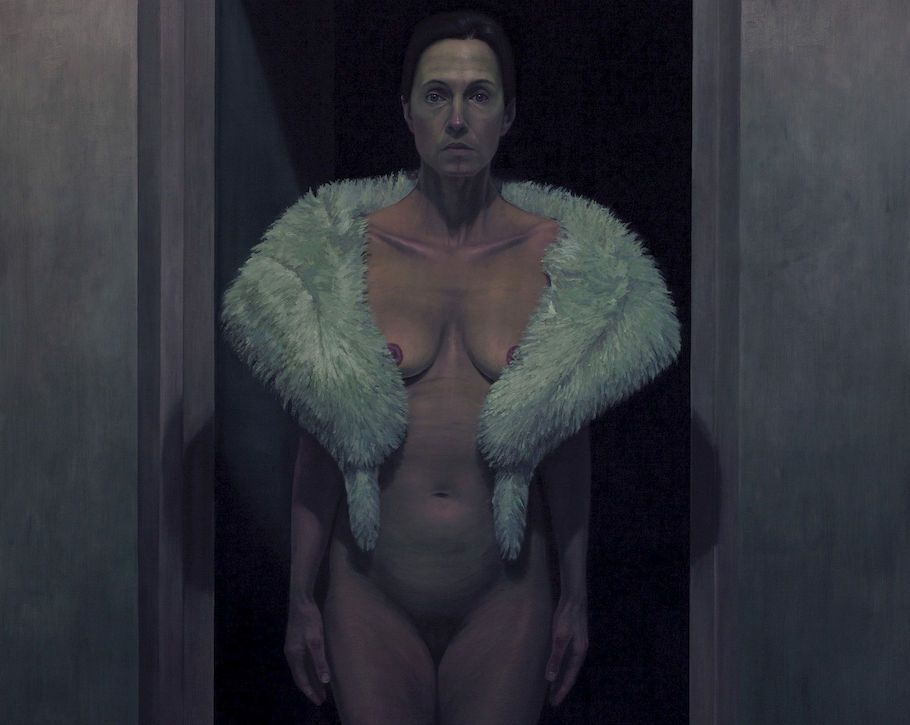 It is dangerous to want to catch a falling knife, but...

Investing his gaze with his »spritualand intellectual wealth«, the beholders of these pictorial worlds are constantly led into »otherworlds« when treading on the scant marks of orientation left by the artist. Step by step, they are drawn towards a wake, a pull sucking them in with great energy, a reality drive that extends and spreads beyond the artistic perspectives created by the Surrealists or Hyperrealists. The term »Sottorealism«5, which has been at- tributed to Aris Kalaizis, refers to a general outlook in the artist’s work that is rooted deep down in the synapses of all realities that orient our attempts at making sense or meaning when envisioning or loo- king at pictures. It is as though the question of reality has been steeped into permanence. Visual artists such as Aris Kalaizis – like photographic approaches of Gregory Crewdson or Jeff Wall – succeed in establishing compositions of that which is real that have a persistent model character. In close relation, they behave like the blending of realities in a movie theater. After the perception has gained energy, this energetic gaze is concentrated on an intense object until the visual powers of the beholder complement each other, inwardly as well as outwardly in one perception of reality – a concentration of reality upon multiple levels, open and compact, and somehow consistent. Since 2008 Aris Kalaizis also works on more elaborate productions in which the subject of that which is painted almost seems incidental, something that is easily overseen. In those paintings, figures and faces are developed out of the spatial depth in muted colors. It almost appears as though the darkness were taking hold of his figures. Within that which is painted, as in Frida or Annett (both 2012), but also in other paintings, a heterogeneity in the color application may be observed.

Kalaizis, therefore, imparts the sensation of intensity by way of a bottomless sovereignty, the certainty that there is always something beneath, something hovering. This is especially the case whenever this sensation had been with us or in us at some other point in time and is made to be more present because it is called forth from our yearning. It is thus more present than any analytical thought could with its logic. Even farewells create a new sense of closeness as in Reccurrence of a Farewell (2010).

»It is dangerous to want to catch a falling knife, but that is exactly what Kalaizis is constantly trying. He does so whenever he merges normality with abnormality, thereby creating tensions and conflicts. The result is always uncertain«6. But at the same time it is a concretely envisioned result, a very clear pictorial orientation – with sharp contours, with great depth. At the same time, the beholder may put on many hats on this path towards his pictorial world. He can fixate for himself some many things, again and again, and yet never arrive at a final definition. He always remains the one who is oriented, navigating on his own path throughout the realities offered up to him in this pictorial world... 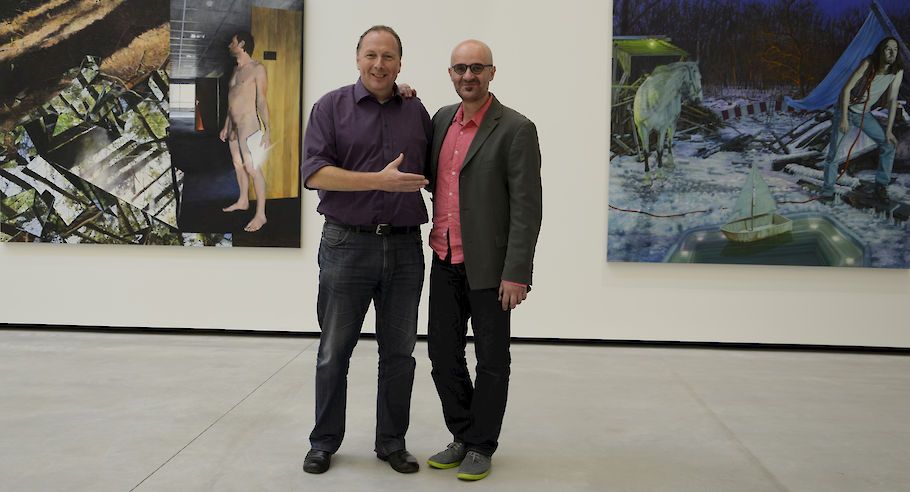 Peter Assmann and Aris Kalaizis at the Austrian Museum Angerlehner, 2013

Dr. Peter Assmann was born in 1963. He studied general and art history as well as German literature. He works as an art historian, writer, and visual artist. From 2000 to 2013 he was the director of the Upper Austrian State Museums. He is an expert on Italian art of the 16th century as well as the international art of the 20th century. Since 2016 he leads the Museo Palazzo Ducale in Mantua. He lives and works in Linz (A) and Mantova (I).