Paintings with a future history

The Dutch museum-director Dr. Harry Tupan describes the narrative elements at the example of two paintings Aris Kalaizis' and the Leipzig School 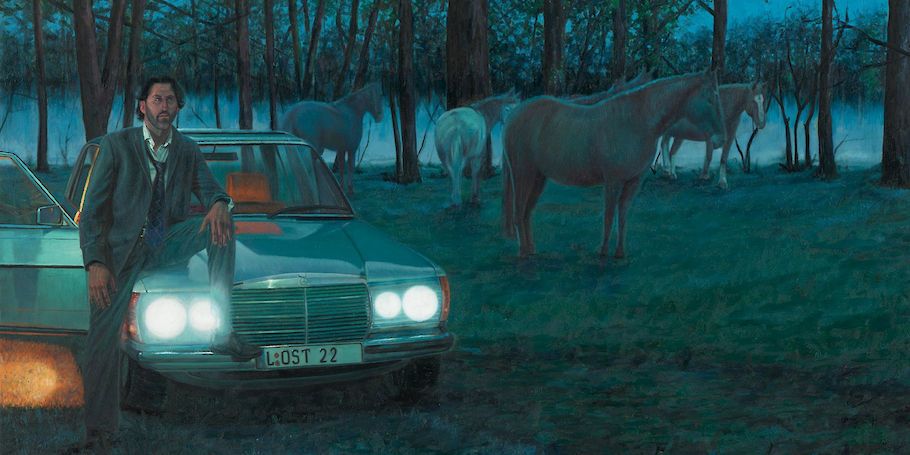 Magical Realism is the heading under which one could view the work of Aris Kalaizis from Leipzig. It is a tradition that the Dutch painter Pyke Koch (1901-1991) described as follows: »although magical-realistic depictions are possible, they are unlikely.« That which is unlikely can be made likely through painting. And this is precisely what Aris Kalaizis shows us.
But his pictures are, however, no mere corollaries of the purely imaginary and thus do not present exact effigies of dreams. Thus, his work process starts out as an observation of the real world that opnens up new perspectives to him. Certainly, the air of a questing nature belongs to him. But we may still safely say that Kalaizis is reliant on the shapes and colors that are in the inventory of our reality in order to approach a deeper, inner, and funally concealed reality. One could also describe this creative process a dialectical unit of being an consciousness.

...observation of the real world

His pictures are very exact, almost photographical (but never photorealistic) representations portraying a neutral, even rational reality, on the one hand, and the irrationality of dreamscapes, on the other hand. He paints figures in uncommon situations that may irritate the beholder. For many this tension brings about an effect of a striking sense of estranging displacement, which at the same time is a great source of fascination and attraction.

Without a doubt, Kalaizis often hints at a hidden mystery that somehow transcends the surface of the picture as in some sort of otherworld, which originated in the artist's dreams, manifesting his desires, the perceptions of his imagination.

His works certainly also exhibit a distinctly cinematographic character. They seem like still pictures, a freeze, that has carefully been composed and orchestrated. This isn’t surprising when one is a bit familiar with the artist's workflow. Kalaizis indeed does precede the painting of a scene with building the scene beforehand, elaborate sets in which sometimes human models are placed.

The term often used in expert circles, »Neue Leipziger Schule«, signifies the third generation of painters who came forth from the distinguished Hochschule für Grafik und Buchkunst, The Academy of Visual Arts. The term is more of an umbrella term than the label of a specific school. As a graduate from that academy, Aris Kalaizis belongs to this group of artist, but it is more productive to consider his work individually and independently from this context. His pictures are marked by a narrative habitus, which is characteristic of the Leipzig tradition and we know so well from the work of Neo Rauch. 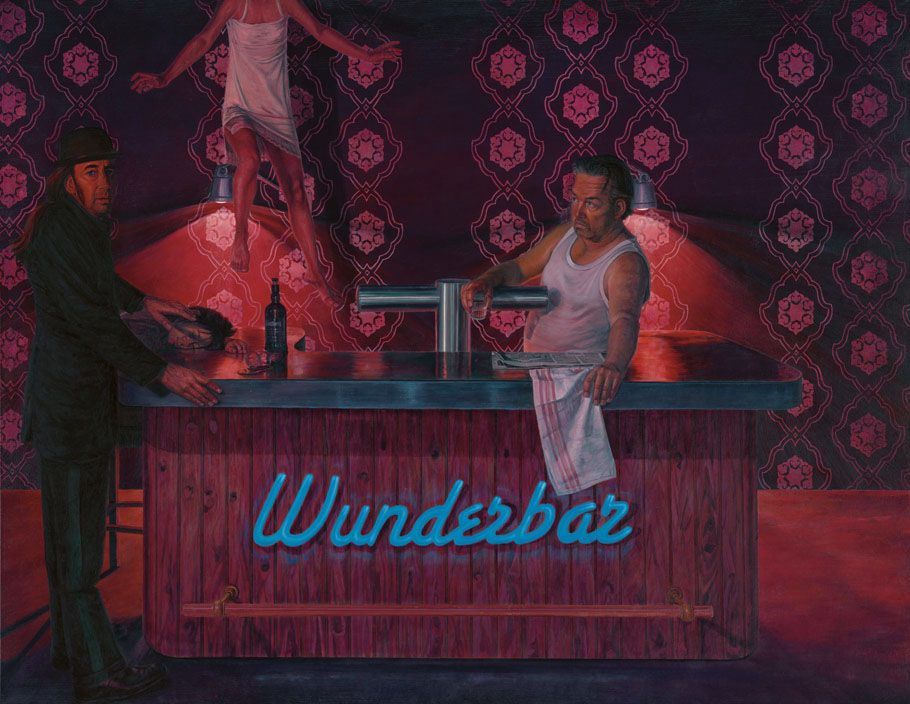 Here we may observe the compositional brilliance of Aris Kalaizis in optima forma. The beam that has crashed down and is now suspended diagonally with planks still attached to it has been moved in front of the angel, and connects every element within the composition, including the man leaning on the oval table with his hand. He doesn’t seem to be realizing the miracle that is taking place behind him. The artist, if asked about the meaning of this, simply shrugs his shoulders. Aris Kalaizis doesn’t offer commentary on his work. The beholders are to decide what we see in these works.

»The Hour of Disembodiment« (2012) is a special piece of work in his Oeuvre that is summed up nicely by the fluorescent letters on the bar. We are watching the liberation of the ascending material body, while the spirit – symbolized by the head on the counter – stays behind. Dressed like an archaic gravedigger, a male figure in a black suit and a dark hat gently holds the spirit back. The repetitive violet pattern in the background accentuates the vertical thrust and directs our gaze upwards. The barkeeper is conscious of the miracle that his taking place before his very eyes, ›Wunderbar!‹ 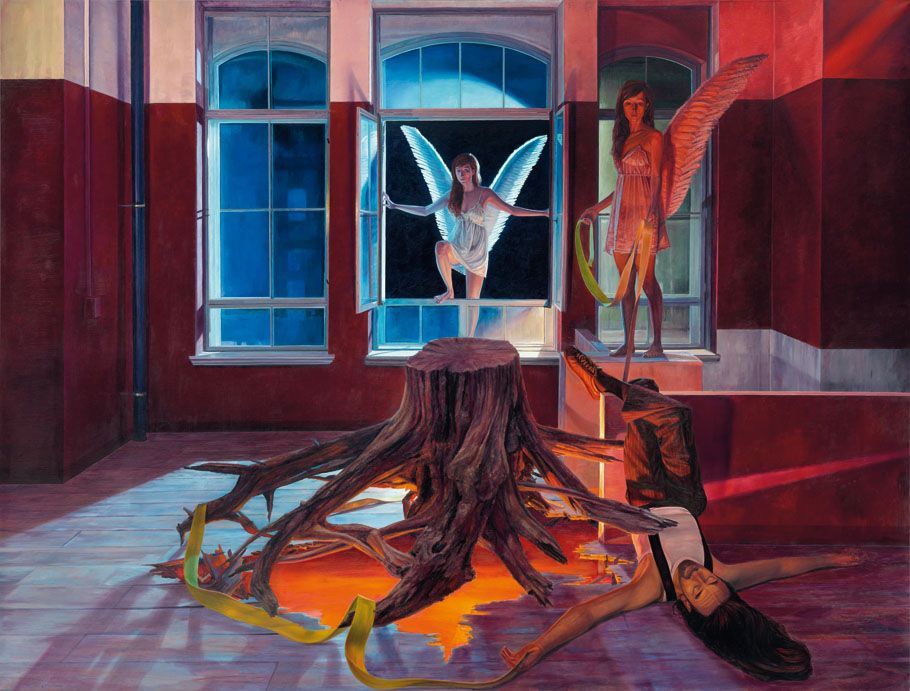 In the large-size painting »The Scroll« (2013) we are meeting with a duplicated angel that probably just entered the scene. Is the man lying headlong on the floor exhaling his last breath or is new wind reanimating him through the scroll? In this modern crucifixion scene, everything seems to be frozen and tied down. And yet the painting suggest movement. The hope and abysmal despair of our existence anticipate a future in its narrative?

This is where the mastery of Aris Kalaizis is revealed. The characteristic combination of artistic intelligence, craftsmanship, and phantasy – all this comes together in this piece.

I'd like to conclude with a few final remarks on one important aspect in his work—light. In many of his paintings, we encounter an enigmatic light that in shape of bundles of rays almost seems supernatural. Sometimes, it is a simple light bulb or the headlights of a car or an illumined globe. Light sources always play an important role in his compositions – technically as well as in regard to the paintings subject and substance. 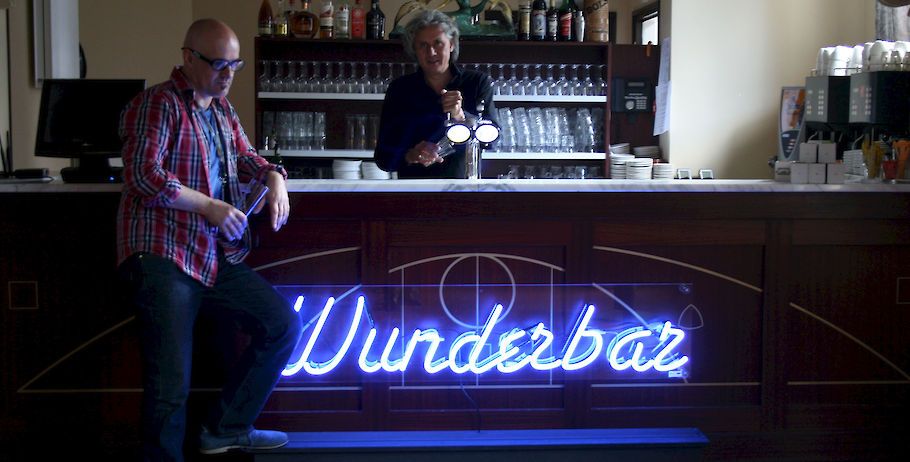 Dr. Harry Tupan was born in 1958. He studied art history at the University of Groningen and was responsible for multiple international exhibitions and publications. In 2009, he curated ›Realism from Leipzig. Three Generations Leipzig School‹ as well as ›The Soviet-Myth. Sociallist Rrealism 1932-1960‹ in 2013. He is a specialist for figurative art and is leading member of board of directors at the Drents Museum (NL).