The Mystery of the Self as an Optical Illusion

In another critique, psychoanalyst Fotini Ladaki examines Kalaizis’s painting Kairos. Using this picture, the author explores the different sorts of competition between human perceptions in relation to what we generally call reality 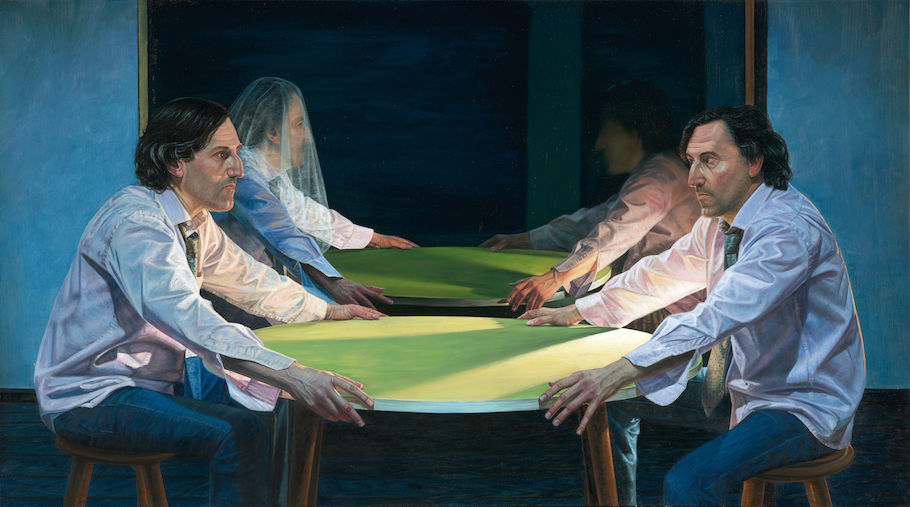 “I have a disease; I see language.”
(Roland Barthes)

“I know that I know nothing.”
(Socrates)


In Kalaizis’ painting Kairos, we see a man sitting opposite himself from both his left side and his right. In the reflection of the two figures in the background, one of the heads is covered with a veil while the other is obscured by shadow. Fixing each other with their gaze, they both (the ego and the self) appear to be launching an attack or a competing, critical look at each other.

What’s this paragone, this contest all about? Surely the "Leipzig School" artist is inviting us to attend this self-reflective spectacle comparable to a theatre performance? This self-reflexive endeavour seems to show everything that’s important and to conceal everything that isn’t. But who are viewers supposed to relate to?

Are they expected to imagine themselves taking the place of the painting’s subjects? Is this image a hypermetaphor for human illusion, an optical illusion, which according to Jacques Lacan is an important part of painting?

The term ‘paragone’ (stemming from the Italian paragone delle arti) is used in art history to denote the competition for superiority among the arts, especially between painting and sculpture. This was a debate which primarily took place in the Renaissance and the early Baroque. But what is the competition referred to in Aris Kalaizis’s painting? 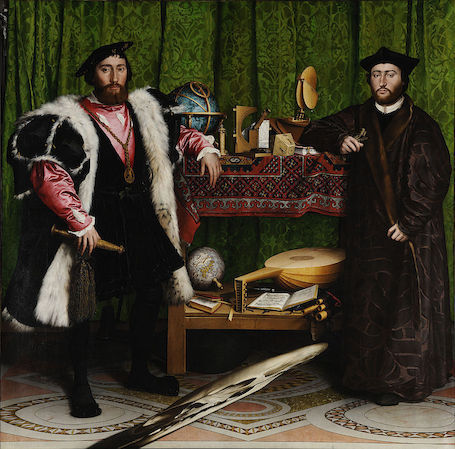 Could it concern inquisitiveness and the competition between eye and gaze?

According to many philosophers and psychoanalysts, despite both revolving around seeing, being seen and inquisitiveness (the scopic instinct), the eye and the gaze are two separate entities.

The Ambassadors, a painting by Hans Holbein, is another prime example of the distinction between eye and gaze as well as the phenomenon of anamorphoses – distorted images which can only be understood with the aid of a mirror or lens.

Back in 1709, George Berkeley wrote in his theory of vision eat percipi est – “to be is to be perceived”. For him, being existed through being perceived.

Lacan also addressed the eye and the gaze in his XI Seminar, including with respect to painting and more generally the image/tableau. According to Lacan, we are beings being watched in the performance of the world. Although seeing from a single point, we are looked at from all sides.

Then again, the gaze may also have something to do with an evil gaze. According to Sartre, it produces shame in the subject being looked at. Lacan attributes the gaze to the outward appearance and concentrates seeing and the eye on geometric seeing. He thus attributes pre-existence to the gaze.

The function of the picture – in relation to the person to whom the painter, literally, offers his picture to be seen – has a relation with the gaze. This relation is not, as it might at first seem, that of being a trap for the gaze. It might be thought that, like the actor, the painter wishes to be looked at. I do not think so. I think there is a relation with the gaze of the spectator, but that it is more complex.

The painter gives something to the person who must stand in front of his painting which … might be summed up thus – You want to see? Well, take a look at this! He gives something for the eye to feed on, but he invites the person to whom this picture is presented to lay down his gaze there as one lays down one’s weapons.

There is a certain illegibleness for the eye, for what is seen remains mysterious

From the outset, we see, in the dialectic of the eye and the gaze, that there is no coincidence, but, on the contrary, a lure. … Conversely, what I look at is never what I wish to see. And the relation that I mentioned earlier, between the painter and the spectator, is a play, a play of trompe-l’oeil…. [W]hat was at issue was certainly deceiving the eye.”

According to this, the contest appears to be won by Kalaizis’s painting. The gaze triumphs over the eye by drawing viewers into an optical illusion. Yet this optical illusion also seems to be supported by the title Kairos. It initially raises several question marks, for the gaze triggers completely different associations. Titles such as The Mystery of the Self, The Hidden Self or I See Myself seem equally possible.

The absence of a constant ego

At first, there is a certain illegibleness for the eye, for what is seen remains mysterious. But is it possible that illegibleness is the demiurge’s intention? Is Aris Kalaizis offering us an optical illusion, a trompe l’oeil? If so, we ought to examine the concept of the self – and whether self-examination is sometimes subject to a certain optical illusion. After all, the self does not offer absolute unity, since the subject of language is divided and self-contained.

The void of being is the subject of the chorus “Not to be born is far the best scenario” in Oedipus at Colonus by Sophocles. This void was expressed differently by Socrates: “I know that I know nothing.”
Freud spoke of the ego not being master in its own house, which was ruled by the unconscious, calling into question the absence of a constant ego.

In his late notebooks, Nietzsche also wrote about the “subject as variety” and as a “rendezvous of persons”. For the hallucinated certainty of an ego constituted by the appearance of the body image or a name assigned to it does not give rise to an existential certainty of the existence of a talking subject.
One creates a semblance, a fiction, a void that has to be filled again and again. Lacan compared this disunity of the subject with the corps morcelé (fragmented body).

What Hegel calls the ‘night of the world’ (the phantasmagorical, pre-symbolic domain of partial drives) is an undeniable component of the subject’s most radical self-experience, exemplified, among others, by Hieronymus Bosch’s celebrated paintings.

Not for nothing did Schelling assert normal reason to be a “regulated madness”.
The constant transformations of our consciousness also make a constant identity and unity appear to be fiction. This is why Beckett’s novel The Unnamable served as a hypermetaphor for the fictional identity of the talking subject.

Schelling asserts normal reason to be a “regulated madness”

On a mythological level, ‘the hidden ego’, which can be translated in the language of psychoanalysis with the unconscious, was thought of as a Trojan Horse secretly entering and attacking us every day in order to seize and occupy our supposedly unacceptable Troy (the conscious) without the Trojans being able to resist in time.

The Trojan Horse is of course also the symbol of cunning. However, this cunning does not imply deceit or malice, but is regarded as the highest form of cleverness, as Harro von Senger reports in his book Die Kunst der List (‘The Art of Cunning’). He regards the western world of our time as blind to cunning since the term has such negative connotations. Cunning also existed in ancient Greece, as the invention of the Trojan Horse proves.

Is it perhaps different from how we see it? There is in fact one world but many realities. The reality we see depends not least on the keyhole we look through. The complex world can be seen through different glasses.
The ego and the self are therefore optical illusions. If we want to look them straight in the eye, we will discover the strangeness that laughs in our face and simultaneously jeers at us.

One world - many realities

One might just as well also pursue the nature of the signifier kairos. Extracting from it the meaning of the favourable moment, we are again confronted with the signifier ‘blink of the eye’ – i.e. moment – and the paragone between eye and gaze dealt with above.

Returning to the word kairos, we know it is not identical to chronos, which refers to the measurability of time. In Greek mythology, Kairos (often spelled ‘Caerus’ in English) was the personified god of the favourable moment, opportunity, the timely decision. Missing it leads to adverse consequences and possibly even insurmountable losses. By the way, Kairos did not originate in Olympian genealogy. He was only placed on Mount Olympus alongside Hermes (the swift messenger of the gods), Tyche and Nemesis as the youngest son of Zeus by Lysippos, the court sculptor of Alexander the Great.

Missing it leads to adverse consequences and possibly even insurmountable losses

In Wikipedia, a dialogue in poetry is reproduced between the observer and Kairos, which was written as an epigram by Posidippus of Pella. The main characteristics ascribed to Kairos are walking on tiptoe, being as swift as the wind, having a single lock of hair on his forehead, being sharper than a razor, and having no hair on the back of his head. At the end of this epigram, the following question is asked:

Why did the artist fashion you?
For your sake, stranger, and he set me up in the porch as a lesson.

Is Kairos himself now the product of the artist? Or do his characteristics listed imply something else hitherto only associated with the favourable moment of an imaginary temporality? In psychology, too, kairos is also the root of Kairophobie, the German term for the fear of taking decisions in certain social situations.
Is this one of Aris Kalaizis’s intentions in this picture? Any fixed decision is a misjudgement, an illusion. A single interpretation spoils each signified meaning.
Beware, my friend, of the signifier that would take you back to the authority of a signified! 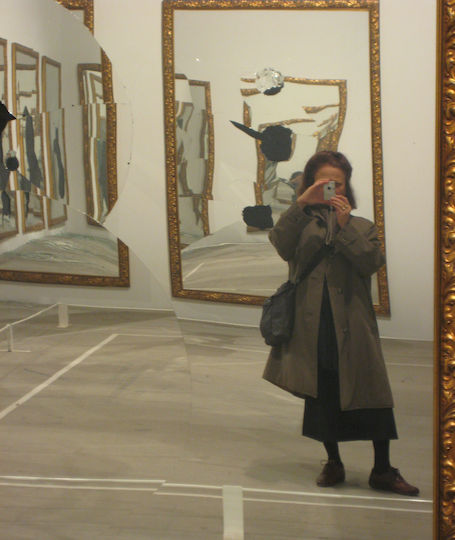 F.L. between many realities ©2018 Fotini Ladaki

Fotini Ladaki was born in northern Greece in 1952. A psychoanalyst after Lacan and Freud, she works in her own practice in Cologne. She is also a freelance writer. In addition to several essays on art and psychoanalysis, plays, stories and poetry, she has also written ‘Moritz’ by Gerhard Richter. About the horror of seeing the experience of being. Her other publications can be found on www.praxisfls.de.