I am not a tourist guide 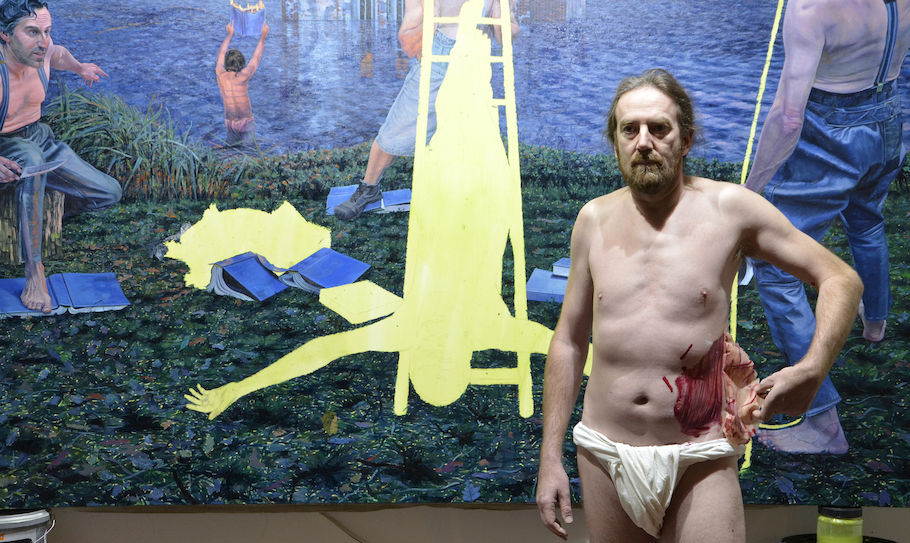 Friend and model: Joe Steffen Thier as Bartholomew in the studio with artificial skin before painting

Metz: How did the idea of painting the legend of Bartholomew the Apostle come about?

Kalaizis: It happened fairly early on, during my exhibition at Frankfurt Cathedral Museum in 2014. Professor August Heuser gave me a tour of the nave. Over coffee afterwards, he asked me half-seriously whether I could imagine painting St Bartholomew. Later on, this light-hearted suggestion turned into a serious venture.
M: What happened next?

K: When things took shape much later, I told him that I wasn’t a tour guide who could objectively show places from times past without adding my own take. Even historical material like this needs to be updated and depicted in the realms of eschatology. I told him that if I could translate the story into the modern era in a manner showing both my time and the church in its time, I could well imagine telling the legend of St Bartholomew.

M: Doesn’t this approach clash with an institution that regards itself as a guardian of the past?

K: Undoubtedly. Even so, I’m optimistic. My confidence stems from my encounter with the individual. Let’s see what happens when my painting is displayed in Frankfurt Cathedral Museum. Let’s see how the Dean of Frankfurt reacts to it – not to mention the people of Frankfurt.

M: Were you familiar with the legend of Bartholomew the Apostle?

K: Yes, very much so. After all, I’m a fan of Stefan Lochner and an even bigger fan of Spanish Baroque. I’ve always been a great admirer of Jusepe de Ribera’s tremendous paintings. When I decided to paint this picture, there were two problems to be overcome: the old magic, which really doesn’t need to be shown again, and the difficulty of dealing with historical characters. It’s a tricky area because it’s hard to avoid slipping into glorification or even transfiguration. Like in my painting of the Pope entitled ‘make/believe’, I was interested in finding a third way – an approach for those seeking other possibilities without over-hasty rejection or approval. But there was another important reason for tackling the painting of St Bartholomew: to use painting to counter the lack of a sense of history nowadays. St Bartholomew seemed ideal for this purpose.

M: Were you inspired by any paintings inside Frankfurt Cathedral, such as the one by Onghers?

K: No, Onghers didn’t interest me in the slightest. There are all sorts of wild stories about the ways in which St Bartholomew was tortured and killed. I approached the subject under the premise of creating an ultimately formally compelling picture. Without this in mind as a painter, you might as well not bother. Whether the accounts which have come down to us are helpful or not or historically accurate was secondary to me. It was far more important from the outset to paint the martyrdom of Bartholomew as convincingly as possible, as if it could only have happened in this and no other way.

M: Is there a connection between your painting of St Bartholomew and your own biography?

K: Of course. My life story is closely interwoven with the production of my paintings. I always combine a great deal with my pictures. You might say I live my paintings. I don’t have several pictures on the go in my studio. There’s always just the one canvas – and that’s the one on my easel. You can see from this that I feel the urge to to develop an intensive, almost contemplative relationship with the picture I have in mind in order to be able to work on my level. And that’s also to be seen in my life. I don’t gain much from chatting to people here and there. But I do gain an awful lot when the familiarity of one-on-one conversation leads to something like a revelation. This gives me plenty of energy for my daily life. As Lucius Annaeus Seneca put it: “To be everywhere is to be nowhere.”

Erhard Metz was born in North Hesse in 1944 and worked for the ARD consortium of public broadcasters in Germany. After retiring as ARD’s director of radio, he launched the arts portal ‘FeuilletonFrankfurt’ (www.feuilletonfrankfurt.de).