A discussion between Eleni Galani and Aris Kalaizis about angel, the meaning of idols as well as the term of the Sottorealismus. 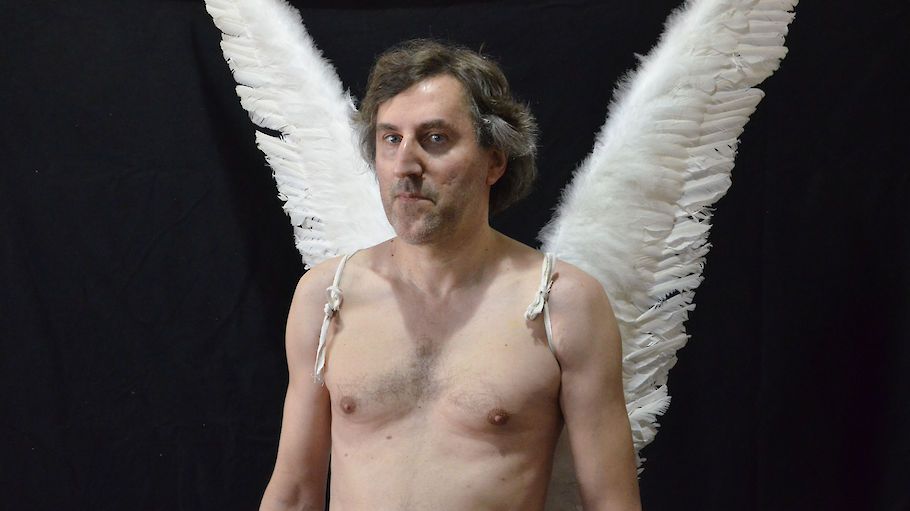 Galani: You was born in Leipzig. Today you are associate with the New Leipzig School. How did you start painting?

Kalaizis: I am a late starter; I began to design relatively late, at the age of sixteen. Until that time, I was dreaming to become a rock star, unfortunately I never learned to play a musical instrument- air guitar wouldn’t give much perspective. This was an important period of my life, until I began asking questions about life and art. Then I felt art could give answers to those questions.

Galani: Your paintings are figurative; they appear photo real and seem to narrate a story each time. Also you give titles to your paintings. On the other hand, I understand that you prefer not to offer commentary on your work. Is the job of the artist always “to deepen the mystery” (instead of trying to explain it)? *

K: When you are at a restaurant, you don’t ask the chef what a dish tastes like, you discover it for yourself. Sometimes contemporary artists put themselves in front of their work and try to explain it. That makes no sense, it is a non-artistic attitude, because it implies that artworks are not strong enough to stand alone without a written interpretation. History of art shows that important artworks last in time, they outlive the interpretations given by their creators. On the other hand, artists who interpret their artworks do not help the viewer to take initiative. Perhaps the need for interpretation has been imposed on us from TV, which has invaded our minds by substituting our imagination, and the role of senses. Furthermore, people read less today thus depriving themselves of a very important tool for thought. This is also true for the movies: explanation is offered to the viewer a priori, pre-given answers fill in all the blanks. The reason why I do not propose interpretations for my artworks is then simple: I address the adult, the intellectual viewer.

...when you are at a restaurant, you don’t ask the chef what a dish tastes like

G: You have lived and worked in Leipzig for most of your life, but both your parents were immigrants of Greek origin; Have you ever visited Greece or exhibited your works there? Are there any ties (people, relatives, fellow artists or feelings, places, images, readings –books-) that relate you to this country?

K: Yes, my parents came to central Europe from northern Greece in 1949 during the “paidomazoma” after the Greek civil war. I have been concerned with the issue of my origin for several years now, hoping that someday I will feel ready and mature enough to incorporate all these feelings into a worthy painting. Certainly, I visit Greece almost every year. Greece is not only the country of my parents; it is also the country of my heart. Unfortunately I have not exhibited my artworks in Greece so far, frankly, I would love that more than anything! I have relatives who live in Greece, an aunt of mine lives in Thessaloniki with her son -my cousin John Kalmazidis with whom we met again recently after a long time here in Germany. He is the coach of the greek women's volleyball national team. A few days ago the Greek team struggled against the German team here in Germany. I am very proud of him.

G: You have often mentioned in interviews that in your early years you have been influenced by the Baroque painter Jusepe de Ribera and the British artist Francis Bacon. Can you mention any other sources of inspiration?

K: References / artistic influences are particularly important at the begining of one’s carreer. At first they offer a sense of orientation- we learn a lot from them- but in the end they become a burden, we should free ourself of them and let them go. Furthermore, we should always (not only at the beginning of one’ s career) be open to new influences and standards. Life is basically a matter of emotion, we have to keep our mind active and keep our interest alive for everything important, whether this is a major exhibition in a big museum, or small surprises of everyday life. This is how I acquire the necessary skills for future creations.

G: You don’t consider yourself a representative of any form, often though your work is described as “magic realism”. Recently a new-yorker art historian has used the term “sottorealism” (which is the opposite of “surrealism”) to describe your work. In greek language because of the pronunciation (σουρρεαλισμός) -which is the same in both cases- the meaning of the two words often coincide, most of the times, there is a confusion. Firstly: Do you accept the term “sottorealism” for your work? Secondly: Can you explain the difference between the two words (surrealism and sotterealism) from your own point of view?

K: It is not my duty to discover new categories in my work field. If someone, though, suggests a new term for my work, I accept it. That new term «sottorealism» certainly explains better what the term "realism" represents-an exact depiction of reality.
I think that neither "realism" nor "surrealism" adequately describe what I do. Surrealism approaches reality through dreams, something which is "beyond reality" –this is not what I do. I often feel uncomfortable when people call me a realist or a surrealist. «Sottorealism», on the other hand, introduces a new category, where space is "below" or "behind" reality, a place at the back or at the bottom of realism, far beyond that very concept of space, as Peter Assmann would point out. Important, exquisite things do not happen necessarily at high altitude; like mushrooms, for example, they grow down in the ground, many of them, perhaps the best of them, they grow under the soil.

G: Most of your paintings resemble at film stills or stage settings. Theatrical, artificial spaces are often created in your works. Can you share with us the making process of a painting?

...Sottorealism: like mushrooms, for example, they grow down in the ground, many of them, perhaps the best of them, they grow under the soil

K: As a painter I rely on observation, I enjoy studying things very carefully in order to show what I feel in an descpriptive way, and convince the viewer. For this reason I observe objects persistently. This process is very important: after having built a model, I can then study it more thoroughly and get close to it easily, then with my own pace I design possible alterations. If, though, the original idea that I had in mind was not good enough in the first place, then even the most accurate representation won’t help.

G: There are motifs which are repetitive in your paintings: angels for example, from my point of view, they could relate to the demons of ancient times (the word, δαίμων much likely came from the greek verb daiesthai which means: to divide, to distribute). “Angel” was considered to be a mediator and the word had then no connotation of evil or malevolence, (ευ/δαιμονία, for instance, was a synonym to happiness or joy). In the works of Plato demon describes the divine inspiration of Socrates. What does the “angel” represent in your works? 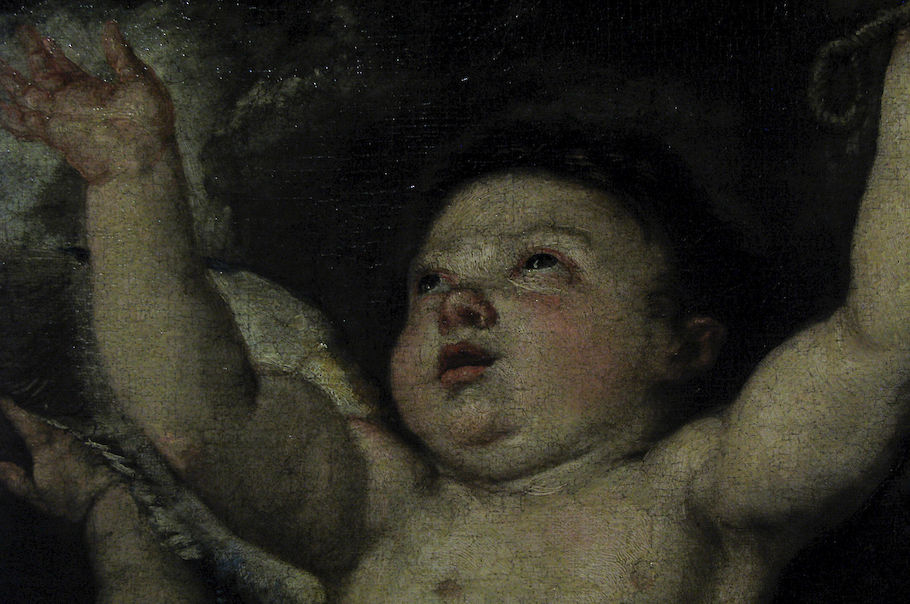 K: I believe that angels have always been symbols of human desires. At the era of Raphael and other painters angels were considered to be a kind of anthropomorphic courriers who traveled between heaven and earth. «Kindness» and «beauty» are not single-dimensional concepts and I have never been interested in them as such, this is why angels in my artworks are usually depicted as a more dark and earthly creatures, so as to resemble humans. From the time I was a teenager I have read and adopted some life concepts as these where described and understood in antiquity. I am refering to the theory of opposites, one has to accept the fact that within each of us controversial elements coexist and there is no use trying to deny and overlook these negative patterns, as if they did not belong to humans, as if they where not part of the human nature. Love and hate, hope and disappointment, love of freedom and the desire to share, all these are human qualities, the one being a prerequisite to the other. It is our own duty to transform them creatively, both in art and everyday life.

...it is our own duty to transform them creatively, both in art and everyday life

K: Indeed in my paintings some figures manifest a feeling of loneliness and alienation. I accept that. It is not something I do intentionaly. In 1998, for example, I have painted a diptych which depicts my wife Annett and my daughter Niki. They seat in the bathtub and laugh. On first view one can see a couple in a joyful, cheerful and relaxed mood. Watching carefully though, one can sense the presence of death behind the laughter of the mother –a single change of an expression details’ and the whole picture changes. I enjoy these twists: from melancholy to humor and the other way round.

G: You seem familial with the presence of the “wunder/wonder” in your work (you also use this word as a title to one of your paintings, the “Wunderbar”). I understand that there are no religious connotations to it. In English the word “wonder” has three different meanings: a) “feeling surprised, mingled with admiration caused by something unexpected, unfamiliar or inexplicable”, b) the desire to question, and also c) the marvel, the miracle. What does the “wonder” mean for you and how it manifests itself in your own reality?

K: I do not agree that the work "Wunderbar" has no religious reference. People relate miracle solely to religion and this is a big misunderstanding. Perhaps the desire for miracle is a kind of "cosmic mysticism". Ι can’t say exactly what it is. Seeking for miracle is though a characteristic of human nature – as also Gnostics believed.

G: Imagination was given to man to compensate him for what he is not; a sense of humor to console him for what he is”, according to Francis Bacon. Could the praxis of making art be a therapeutic process for the artist? What about the art lover and the beholder of a painting?

K: The need for treatment suggests the existence of a malfunction. For some people, yes, the act of painting could have a therapeutic function in some way. It is not my case. I think that therapeutic painting should be done, rather, in another, different way - I do not know which way exactly... Hard work and practice are the most important things to create a project. The continuous pursuit of progress may be a tedious task, it helps though to live consciously -personally, I have not made much progress towards that matter.

G: What are your plans for the future?

K: I believe I'm still at the beginning. The best is ahead to come.

Eleni Galani is a museologist and writer born in Athens/Greece in 1976. She has studied Archaeology and History of Art at the National and Kapodistrian University of Athens, at the Université de la Sorbonne/ Paris I (DEA) and Museology at the Ecole du Louvre and the Universidad Autonoma in Barcelona. She has worked in various museums and galleries in Athens and abroad. Since 2013 she lives and works as a freelance editor for art and literary magazines (bookpress.gr, Art22, diablog.eu etc.) in Frankfurt am Main.