I am not a Disciple of any School 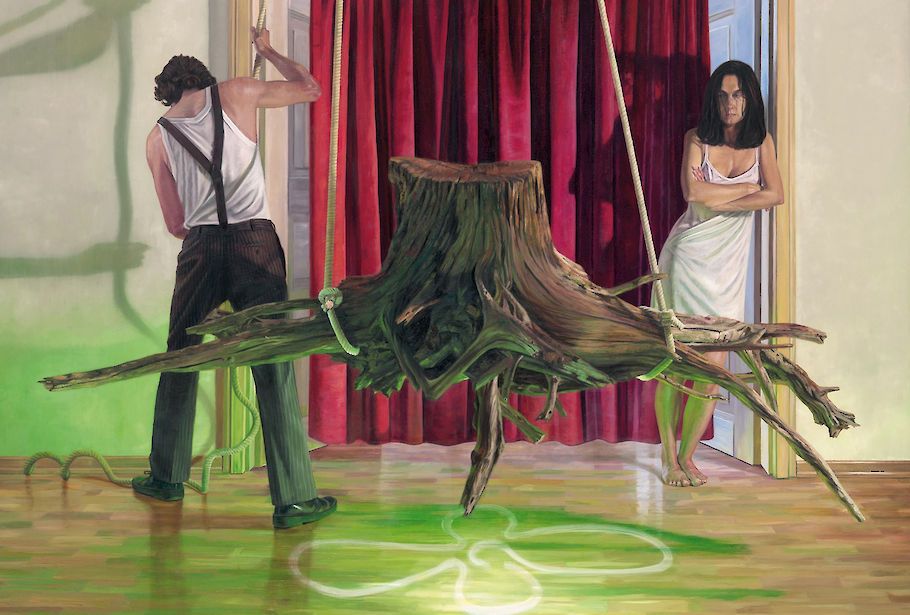 German painter Aris Kalaizis finds inspiration right in his own backyard. He writes scripts to help transform his ideas into paintings. When it comes to painting, he believes that Leipzig ist he most interesting place on Earth. After graduating from the city’s prestigous Hochschule für Grafik und Buchkunst (Academy of Visual Arts) in 1997, Kalaizis – born and raised in East Germany – stumbled upon something: ‚a gaping hole, the so-called free market’. Since then, he has painter whose works draw interest from all corners of the globe. By Silvia Rinofner.

Rinofner: What ties you in Leipzig?

Kalaizis: This city runs through my veins. Of course, Leipzig isn’t perfect. In fact, at times it can be a real pain. But I really feel at home here in “little Paris”, as Goethe once dubbed the city. Leipzig is a comparatively un-German city. I mean, it has a certain international feel to it. It’s neither a metropolis, nor a backwoods village. That’s important for a painter.

R: Do you consider yourself a member of the Leipzig school?

K: No, I’m not a disciple of any school. I’m my own man. Clearly, there’s no denying that people are a common thread in both my work and theirs. But I’m just not sure whether that’s enough to consider myself part of a larger community. I am a great proponent of the power of nuance. I’ve always sought out new terrain on my journey. Although occasionally, I would lose my way. It was never my goal to revolutionise art, but rather to find nuances that had yet to be explored within existing art forms. When painters dare to venture down this sort of path, they obviously don’t want to be seen as a member or follower of a given school.

R: What’s Leipzig‘s cultural role both in Germany and the wider world?

K: Well, as far as painting goes, Leipzig is – at the moment – the most interesting place in the world, as far as I can tell. I don’t wish to disappoint you, but as regards culture more broadly I can’t really tell you very much at all.

...It’s not about coming up with a creative idea, it’s about recognising a striking image when it comes along

R: Where do you get your themes and backdrops from?

K: I don’t have to go far. I find many of the backdrops and motifs for my paintings right in my own backyard. But I can’t just lift a backdrop as it is and plonk it onto the canvas. So if I photograph something I’d like to use in my work, I have to tweak it in the studio. It’s a process of abstraction. It’s not about coming up with a creative idea, it’s about recognising a striking image when it comes along.

R: When creating an oil painting, you don’t start off with sketches and drawings as one might expect. Instead, you write a script much like a screenwriter. What does this process entail exactly?

K: It’s really quite simple. When I think I’ve found a suitable backdrop for a new painting, I take a photo of it. Next, I pin that photo above my bed and look at it for weeks on end. It’s a painfully slow process, much like the fermentation of wine. After weeks of looking at the photo, I can usually close my eyes and see exactly what I plan to paint. As it is, I tend to see much more clearly when my eyes are shut.

R: Where does the script come in to it?

K: Afterwards. I don’t take any notes while the image is coming to me. I don’t think you forget ideas when they’re really good. The script is very much a set of director’s notes in which I describe the painting’s composition, lighting and the postures of my ‘actors’, as well as their clothing and the like. I do this because writing allows me to approach my image from a completely different perspective. Once I’ve sketched the figures, referring back to what I’ve written instantly reminds of what I originally had in mind and how to bring it to life.
A ‘spray-painted’ flower, much like the one in “the Ritual” often appears in your work.

R: What does the flower symbolise?

K: Some people say it’s a flower, others say it’s a butterfly. When I first incorporated it into my paintings about five years ago, I saw it as a formal means of breaking up the picture by adding a graphic element. And I’ve been using the technique ever since, because I just think that these dual spheres are essential to my work.

R: Do you believe that there’s such a thing as “prerequisites” you need to master the art of painting? If so, can they be learnt?

K: When you say “the art of painting”, you’re generously implying that every painting is a work of art. I prefer to see paintings as paintings and art as art. That’s not to say that paintings can’t be art, but it’s by no means a given. And yes, you can learn to paint. After all, a painting is a thing, which is crafted. You can’t learn how to do it at an art academy; they’re more about creating an environment for intellectual exchange. Painting is open to anyone who’s willing to learn. It often means working in humble silence, and often in solitude, in the hope that you’ll gain a deeper understanding. And if you keep at it, and have a modicum of self-control, one day you’ll find yourself in the midst of an intimate love affair.


The Leipzig school first began in 1961 when painter Bernhard Heisig established the first freie Malklasse (free painting class) at the city’s art academy – which today lives on as the HGB Leipzig. The term Leipzig school refers to a wave of contemporary painting in the 1970s and ‚80s that started in Leipzig and was shaped by the artists based there. In addition to Bernhard Heisig,
the movement’s founders include some of the GDR’s most famous painters such as Willi Sitte, Wolfgang Mattheuer (1927-2004) and Werner Tübke.